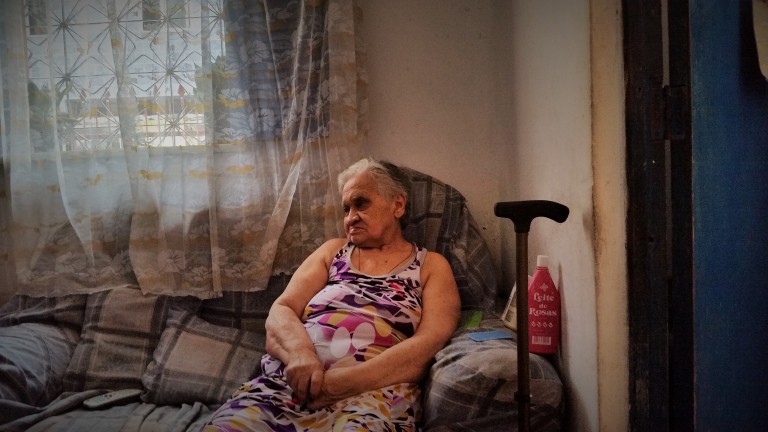 I saw a ghost when I was young. We lived in the interior of Rio Grande do Norte, in the Northeast, and my family worked on the farm of our patrão. It was a very large farm, and one night I went to the house where one of my sisters lived. It was all tillage around – corn, beans, rice – and an enclosure for cattle. I passed under the wires, and then by a cistern, one of those formations that God created when he made the world, whose rocks filled with water when it rained, and a light came and started to follow me. I ran and I ran along the path, and that light was always following, following. I thought to myself: this has to be a ghost. Everyone was sleeping where I lived – my brother worked all the time, there was so much to do – and I ran and I ran and I got home with my mouth wide open. My mom and my brother went out to see, but nothing was left. I was the only one who had seen it.

Ave Maria, I suffered working on that land. I was three years old when my father died, and my mother was left with six daughters and two sons. My patrão only wanted my mom working in the houses, washing the family’s clothes, the rest we all worked on the farm, planting, harvesting, cleaning the brushes. It was nice to live in the Northeast but it was a lot of work. My husband worked on a side of another farm that was close to ours. He was a boy, 12 years old, when I met him. I saw him working one day – he was a really hard worker – and we stood there looking at each other. I studied during that time, and one day my father-in-law saw the way he looked at me while I was walking home. He said, “that girl is going to be my daughter-in-law.” People didn’t kiss on the mouth then – we just held hands. We spent three years dating and after that we married.

I don’t know how old I was when I came to Rio. I was 20 years old when I married, on December 20, 1953, and I came here in 1966 – you do the math. It was all water beneath here; there were boats that passed right by our porch. Nova Holanda, its main roads were all water, water, water. We had to walk about 10 minutes to get water for drinking, my youngest daughter and one of her classmates would get it and carry it on their backs. There was a Military Policeman who worked around here and he would charge the residents who wanted to have electricity.

My husband bought this land here. When he came here he didn’t know anything, but he learned. He worked as a bricklayer, doing projects, construction; when someone crashed their car or broke something else he always knew how to fix it. He would work at night and get back and go to sleep in the morning, and when he woke up he ate lunch and then went to fill the land. That’s how he made this house. The residents around here put in land on their own; each one had to save the money to buy his own truck to fill the land. These roads around here were eventually paved because they were creating schools; the other people who really lived on the edge of the water were moved by the government to another part of Maré. 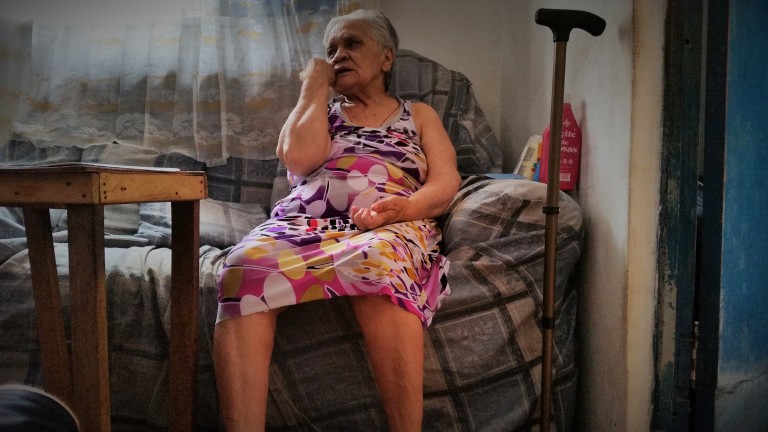 I worked for 30 years doing cleaning and ironing in people’s houses. I left here at 5 a.m. every day and took two buses to arrive at 6:30 a.m. On Tuesday I worked in Copacabana, on Wednesday I worked in Laranjeiras, on Thursday I worked in Ilha do Governador – it was like that, each day in a different house. I didn’t work with a carteira assinada because those who work for a day at a time don’t have them; it’s only for people who work more than two days in a house. I liked the work, I worked for myself, I would arrived there at the houses and when I finished I could go home. They never complained about the cleaning that I did. The woman I worked for in Ilha do Governador was really good to me. She gave me everything: she gave me used clothing, she gave me anything else I wanted, she would use a piece of clothing just four or five times and then give it to me. Even today I still call her and talk to her, and she still sends me clothing.

Thanks to God I was very well received in Rio de Janeiro, the worst that I’ve had is this condition that I’m in right now. I had a stroke four years ago. That day I left home, worked until noon, and then I went to catch the bus. The bus was stopped, and I sprinted to catch it, and when I got on my blood pressure increased, since I suffer from high blood pressure. The bus had its air conditioning on, and when I entered I received a shock and bam! I fell on the floor. One of the workers called an ambulance and they took me to the hospital. The doctors told me, “this happened because that’s what you wanted, because you didn’t take your medicine.” I did take my medicine, but it didn’t work that day. It’s been four years that I’ve been like this. The doctors think I’m this way because it’s what I want, that my arm is this way because it’s what I want, that I have trouble getting up because it’s what I want. When I dress I ask God for this pain to go away; I ask Jesus to hear my suffering.

With the pension that my husband left me I don’t need to work, thanks to God, it’s a very good pension. My son takes care of me; he’s the the one who pays the bills, telefone, light, and everything else. My youngest daughter lives in the Baixada Fluminese, the older one lives in Campina Grande. She took care of her father until he died, and then she left, she never came here again. The other one, she never calls, she never comes here. Once in a while I’ll send a message for her: “do you know what you’re doing to me?”