Brazil is currently in the middle of its worst economic recession in decades. The Zika virus continues to spread throughout the country. President Dilma Rousseff was suspended from governing last week as the Senate opens a case on her impeachment that she is likely to lose.

Amid all of this, the country’s most famous city, Rio de Janeiro, faces serious infrastructure concerns as it prepares for the Summer Olympics in August.

From here in Maré, one of Rio’s most notorious favela complexes, things must be spiraling out of control, right?

People have asked me some version of this question during the past weeks, and though this blog isn’t about politics or economics, I feel compelled to write about the situation in Brazil.

With all that’s been written in the media about the country – one crisis after another, culminating in the likely impeachment of the president – you would think that everything would be up in flames.

The truth is that here in Maré, during Brazil’s political and economic crisis, the realities of peoples’ lives remain normal: that is, more diverse and surprising than anything we might expect.

Dilma has been accused of borrowing money from state banks in order to hide a federal budget deficit during her 2014 reelection campaign. Though it’s an impeachable crime, it’s one that virtually every previous government has also committed – the sentiment against her is more reflective of discontent with the country’s recession and a recent corruption scandal at the state-owned oil company, Petrobras.

But the corruption extends to just about every other other key politician.

The leader of the impeachment process, evangelical radio host Eduardo Cunha, was recently forced to step down as speaker of the lower house of congress after allegedly accepting up to $40 million in bribes.

Dilma’s Vice President, Michel Temer, the acting president during Dilma’s trial who will serve out her term if she is impeached, is facing a separate impeachment process of his own and has a favorability rating of two percent.

There are more examples: one congresswoman who voted in favor of Dilma’s impeachment saw her husband, a mayor, arrested the following day for corruption charges. Of the 594 members of Brazilian congress, 352 are either facing charges or under investigation.

While the trial has yet to begin, Dilma is probably going to be impeached, given that the Senate needs a two-thirds majority (or 54 votes) to carry out the impeachment and already voted by a total of 55-22 to open the case.

As Temer has indicated during his first days in office, this means that Brazil will take a conservative turn, most notably through the adoption of austerity measures expected to reduce social spending and programs for the poor.

His cabinet, consisting entirely of white males, includes as science minister a creationist, as agriculture minister a soybean farmer and politician who has deforested parts of the Amazon rainforest, and as health minister a politician with no background in medicine.

The details get even more absurd, but suffice to say, none of them are good. Dilma has been an incompetent president, but there is no indication that Temer will do better considering his cabinet appointments and Brazil’s systemic corruption. 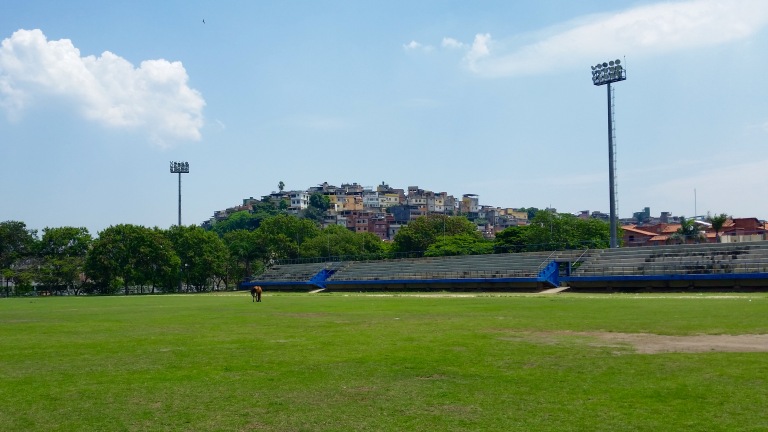 Now, here’s the interesting part: with all this upheaval, walking through Maré you would have no idea that any of this was happening.

Yes, you can see the effects of the recession, but they would not be visible to you at first glance. For every business that I’ve seen close around here, I’ve seen another that’s either opening or expanding. Most streets feature construction projects for new houses or apartments to rent. On the weekends, bars are full and people host parties on the street.

I’ve heard people say, “na favela não tem crise,” or, “there’s no crisis in the favela,” generally referring to the economic improvements made during the past decade which substantially helped the lower classes.

It’s an exaggeration, of course: talking to people, you’ll hear about family members out of work, stores with fewer customers, and, most obviously, complaints about rising prices of food and other basic goods.

But the fact is, these people aren’t starving, or wallowing in the effects of Zika, or dying en masse at the hands of drug gangs. They’re a lot more than victims of crisis after crisis, a meaningless trope that is becoming even more overused by media in the runup to the Olympics.

Remember: Brazil is a country that had a hyperinflation – with annual inflation rates over 1,000% – just two decades ago, which is also the most recent time that a president was impeached. Three decades ago the country had barely emerged from a 21-year military dictatorship.

Within this context, economic and political instability is nothing new; if anything, according to many, things were worse during the dictatorship and crises of the 1990s.

This may help explain why the general response to the current situation is neither anger nor sadness, but apathy.

People around here aren’t up in arms. They’re not crowding in the streets to protest or celebrate. For the most part, they’re not talking about politics at all: in the past two months, I can count on one hand the number of conversations in which someone has mentioned Dilma or her impeachment.

Think back to the stories on this blog: aside from those of Douglas and Rodrigo, none of them engage with politics, and it’s not because I haven’t asked.

It’s because when I have asked, most reactions have been a disinterested mutter that there’s too much corruption here for anything to seriously improve. In Maria’s words, “Those who enter in politics already encounter rottenness, and they end up worsening everything, putting the money in their own pockets, causing more poverty, more violence.”

In their stories, as a consequence, politics are beside the point. Given that the state doesn’t function the way it should, these people’s experiences center around things they can control, like family, religion, and their own self-reliance and will to succeed.

When we think about it, doesn’t this make sense? Aren’t these more important to our own lives too than politics? Any country is more than the politicians who control it, and this holds even more true in one as corrupt as Brazil.

This blog has shown that despite the media emphasis on pathology – favelas as areas of lawless violence and widespread poverty – the reality is much more complex and interesting. Maré is filled with entrepreneurs, artists, beach vendors, soccer coaches, aestheticians, and people of all types who are charismatic and self-realized – nothing like the sad “favela dwellers” we see in movies.

And even though residents here do face significant challenges, they’re challenges they believe they can overcome – regardless of who’s in charge of the government. As Adriana said:

“If you think about the obstacles that come in life, you’ll never get anywhere. You’ll end up not doing anything; you’ll become that person that stays halfway between things. That’s not who I am – no way. I’m someone who’s always moving forward. I came [to Rio] from the northeast and now, thanks to God, I have my home, my family, my life, my work, my structure here for parties. I’m not thinking of looking backward.”